As I spoke about a little bit in a previous post, inadequate access to savings tools is a classic example of a poverty trap. Without basic banking services, smoothing consumption levels and preparing for emergencies is far more difficult. Income levels differ drastically across Washington D.C., which should hopefully make it an interesting case study for looking at the accessibility of these basic banking services.

Much has been made about the high cost for the poor of using a bank in both informal and formal research. The primary reasons why traditional banking services are not accessible to low income earners mostly fall into two categories: a lack of banks within a reasonable travel time and high fees for basic services for small account holders. Recently, Bernie Sanders suggested turning Post Offices into banks to address both of these issues. His proposal would allow post offices to run savings accounts, cash checks and other basic financial services.

While a lot of the research focused on how traditional banks are too expensive to use for low-income earners, I was curious about how many people would gain walking access to a bank given the change.

Most of the data is from Washington D.C.'s open data portal. I used the datasets for bank locations and Post Office Locations. In order to get census tract information, I downloaded the ACS 5 year estimates Geodatabase from The U.S. Census Bureau. Since the Geodatabase format is an annoying product ArcGIS' long time domination of the GIS market, I followed the instructions here to use the data in QGIS.

If you are trying to follow along at home, looking through the metadata shows that "MEDIAN HOUSEHOLD INCOME IN THE PAST 12 MONTHS (IN 2015 INFLATION-ADJUSTED DOLLARS): Total: Households -- (Estimate)" has Short_Name=B19013e1. I also noted the margin of error info Short_Name=B19013m1. To calculate poverty status, I noted down B17001e1 and B17001m1 for total population and B17001e2 and B17001m2 for population in poverty. While I could have converted the whole database to Spatialite, I didn't want to deal with Spatialite's license if I ever put the code on Github. Instead, I installed the MMQGIS plugin and exported only those fields to a CSV. I then joined the CSVs to the Census tract polygons on GEOID_Data.

With the Census tract polygons, I used "Vector -> Analysis Tools -> Count points in polygons" to find the number of each type of financial service in the tract. I then used MMQGIS again to export the attribute table to a CSV for analysis in R.

To make sure that the income data I pulled out is accurate, I checked it against data from the American Fact Finder to make sure it matched. Thankfully, both the poverty and income numbers were the same.

First, we'll look at Washington D.C.'s median household income. This isn't anything new, so I won't dwell on it too much except as an extra sanity check. 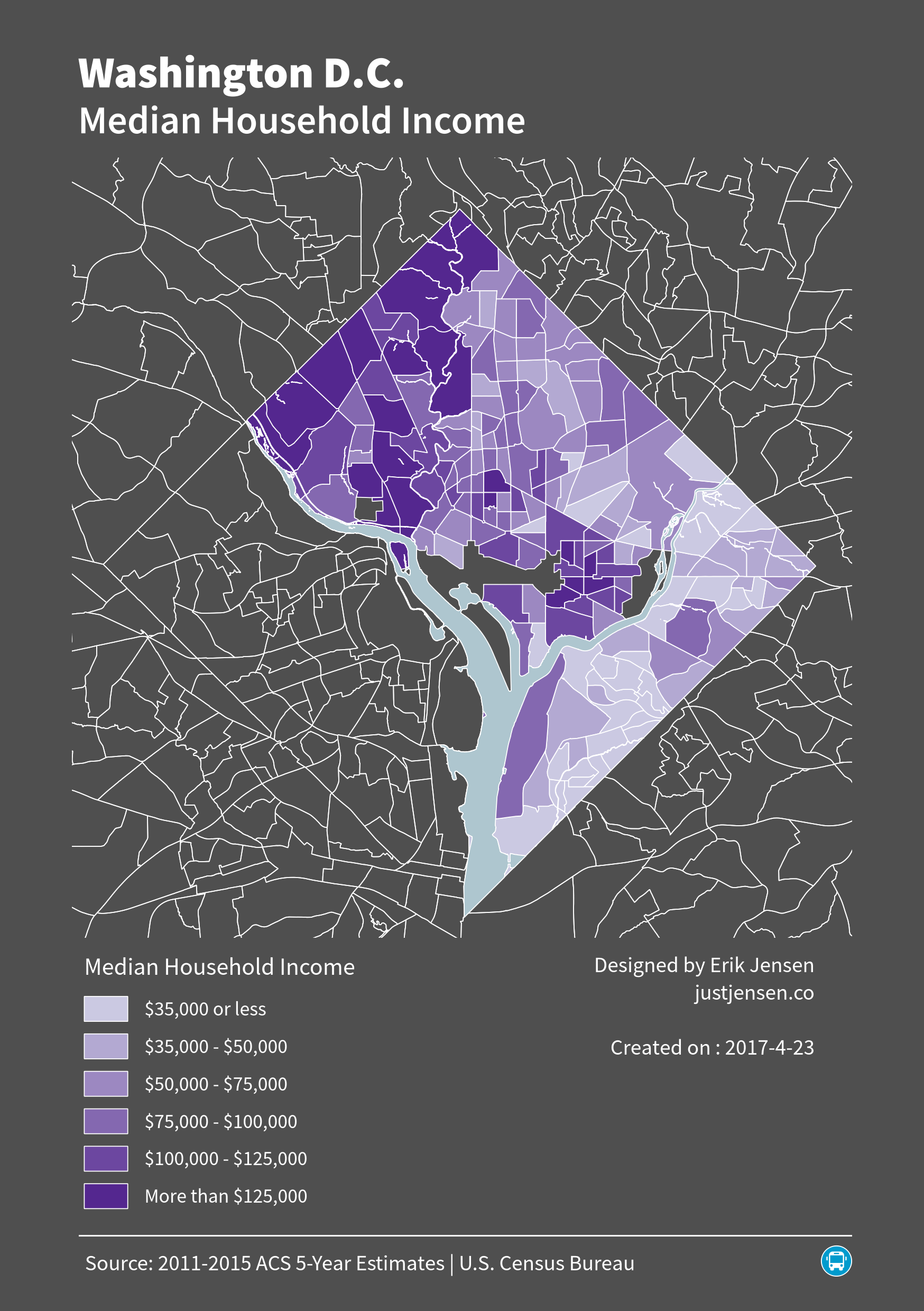 As expected, median household income increases as you go north and west and decrease as you go south and east.

Using the point data of all of the bank locations, I reprojected the data using EPSG:2248 (NAD83 / Maryland (ftUS)) so that I could easily create a half mile buffer around all of the points. A half mile buffer is a poor way of measuring accessibility (the linked paper talks about transit catchment areas, but I feel the message applies here as well) because it does not take into account things like the actual walkability of the roads, quality of transit access, etc. Anybody who would ever want to publish a paper on something like this should use the pgRouting library and go from there.

Creating a half mile buffer around the banks and the post offices results in the map below. 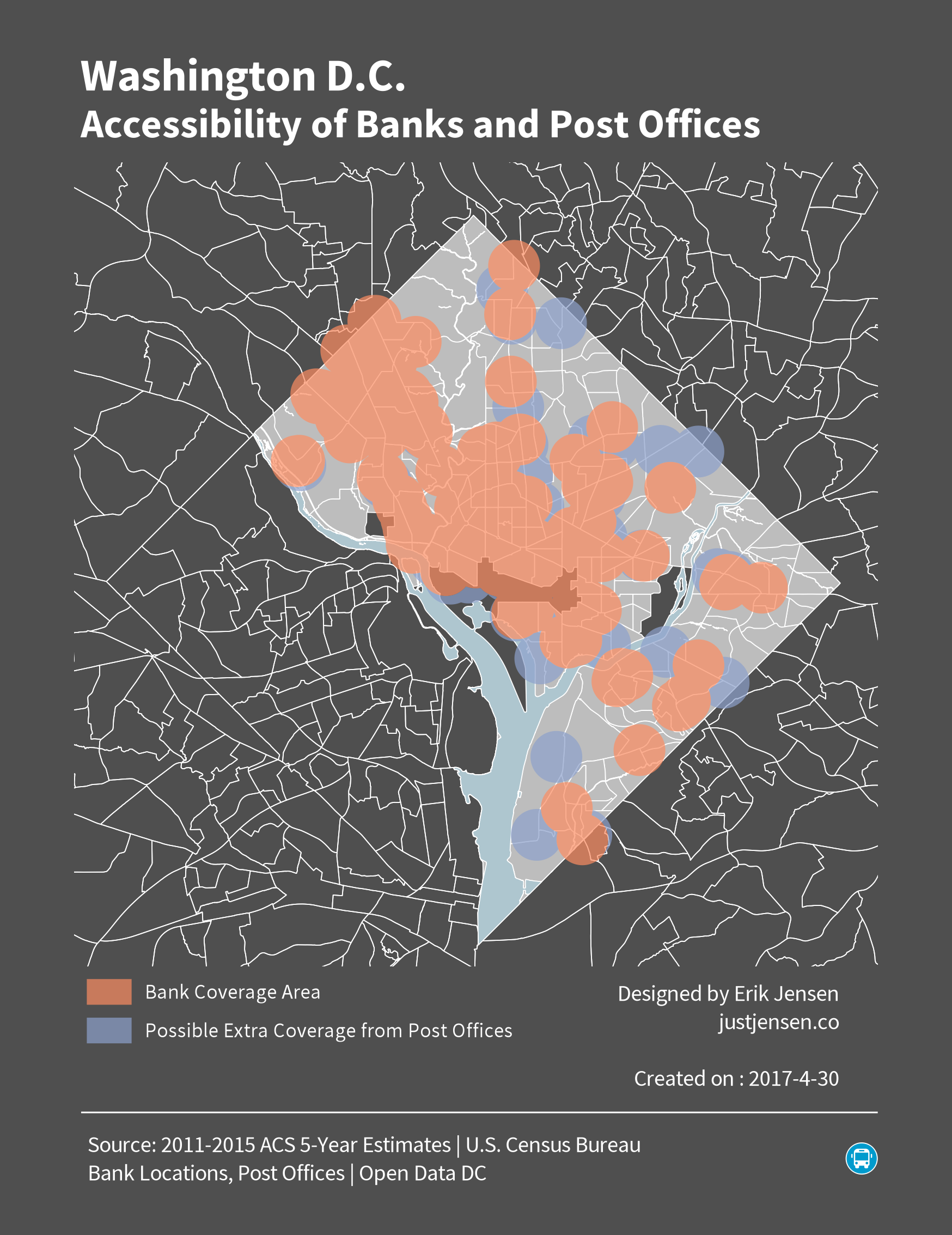 In the higher income northwestern neighborhoods, letting post offices offer basic financial services would not help out many people, as the coverage by traditional banks is very good. Converting post offices to banks seems to increase coverage reasonably, but there would need to be far more post offices than there currently are to reasonably cover all of the low income areas in Washington D.C.

Numerical Analysis of the Coverage Areas

While the above map suggests a large improvement in people's ability to get to their financial services, I wanted to quantify the benefit a little bit more if at all possible. I looked at the percentage increase in coverage area in poverty census tracts (at least 20% of residents below the poverty line). Using this number, we can then approximate the number of people who will benefit. The limitation here is that residents don't disperse themselves evenly across a census tract, although at least we do know that most census tracts cover about 4000 people.

The margin of error on the poverty rates from the ACS is very large. The population error is also quite large. The minimal impact would occur when census tract populations are highest, but the number of people in poverty is the lowest. In this scenario, there are only 24 poverty census tracts. In this case, the percentage of coverage would go from 15.7% to 45.0%. While the percent change is much larger, the number of people affected is smaller, at only 3,600 people or 4.3% of the poverty census tract population.

Final Thoughts and Potential Next Steps

Ignoring error margins makes it look like a very good idea to turn post offices into banks. Many more people would be geographically covered, and assuming the post offices sold the basic services at cost then even more would actually have access to checking and savings accounts than they would have otherwise. However, this relies on several assumptions. First of all, post offices would have to be open at convenient times and undercut existing bank fees. Neither of these would be a given. People would also have to trust the federal government with their money, despite trust in government declining. In the end though, a postal savings service in the U.S. would just be a return to the first half of the 1900s, when there was a government backed postal savings system.

All of the data I used in this article is available on my Github.