As some of you probably know, every now and then I play video games in my free time. Recently, I have been playing a decent amount of the game Starbound. Currently, the game is in Early Access on Steam, so it is in Beta and things can easily change about it. Right now, I am playing the Enraged Koala (awesome names right?) release, and as of January the game has sold over one million copies.

A Sandbox Game to the Core

At its core, Starbound is a sandbox game with (sort of) randomly generated planets where you can fight monsters, explore different planets, mine ores, and craft items. Several of the creators originally worked on Terraria, so this supposedly feels like the spiritual sequel. You create your character from one of six different races, and there are only visual differences between them at the moment. Beyond that, there are options for everything from skin color to "personality" (the way your character stands). 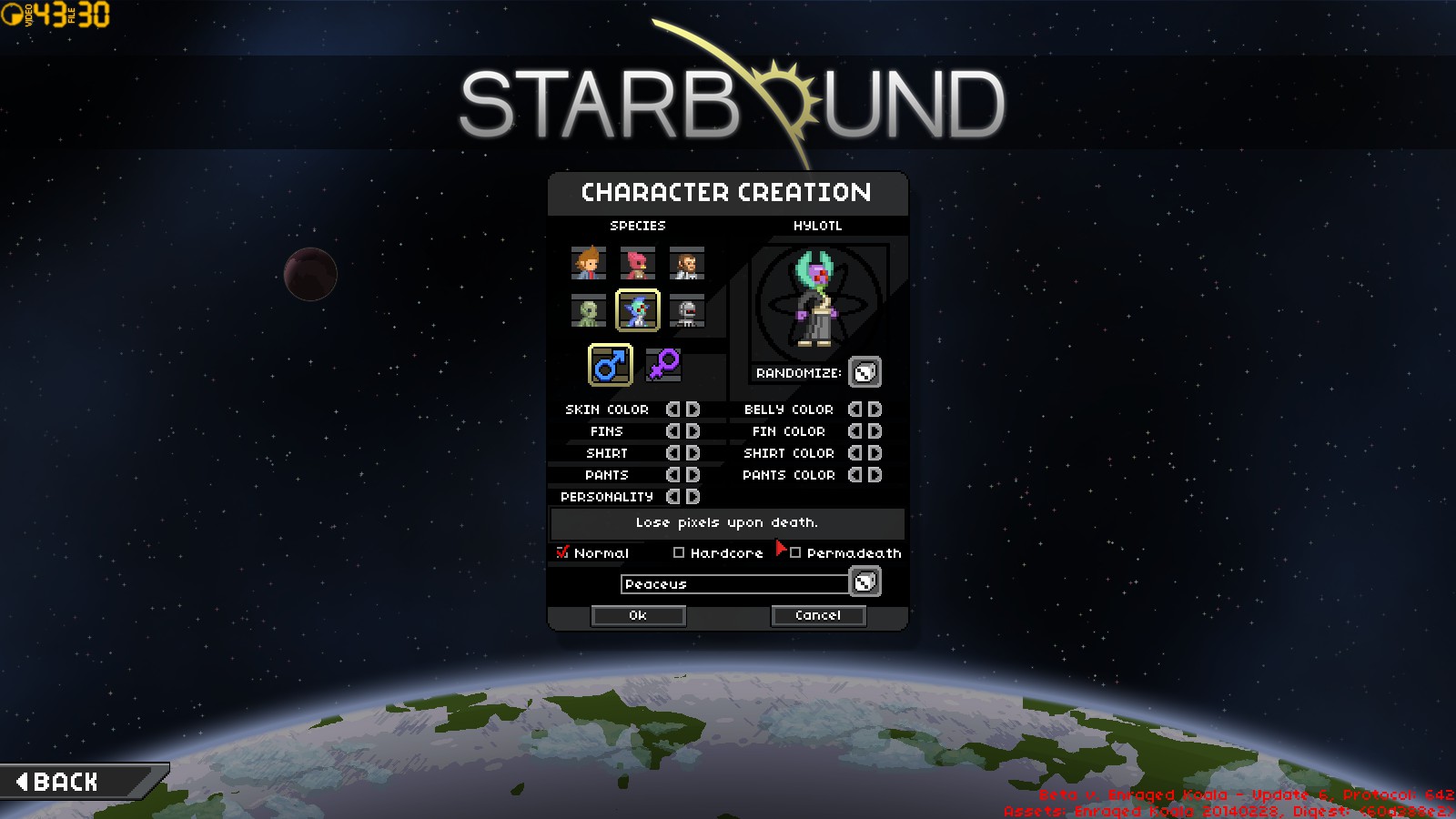 There are three game modes: Normal where you just lose 1/3 of your pixels after dying, Hardcore where you lose all items after dying, and permadeath which speaks for itself. Needless to say, I see no reason to ever choose the permadeath option, but it would definitely add some adrenaline to the game.

Once arriving on the starting planet, the game runs you through some tutorials to get you used to mining, hunting, cutting trees, and exploring. They are pretty basic at the moment, but I have a feeling the creators are going to add more quests in later given they seem to have created this entire system based on it. Really though, this is all just to introduce you to the mechanics of the game. The thing about sandbox games is you create your own story and own adventure. 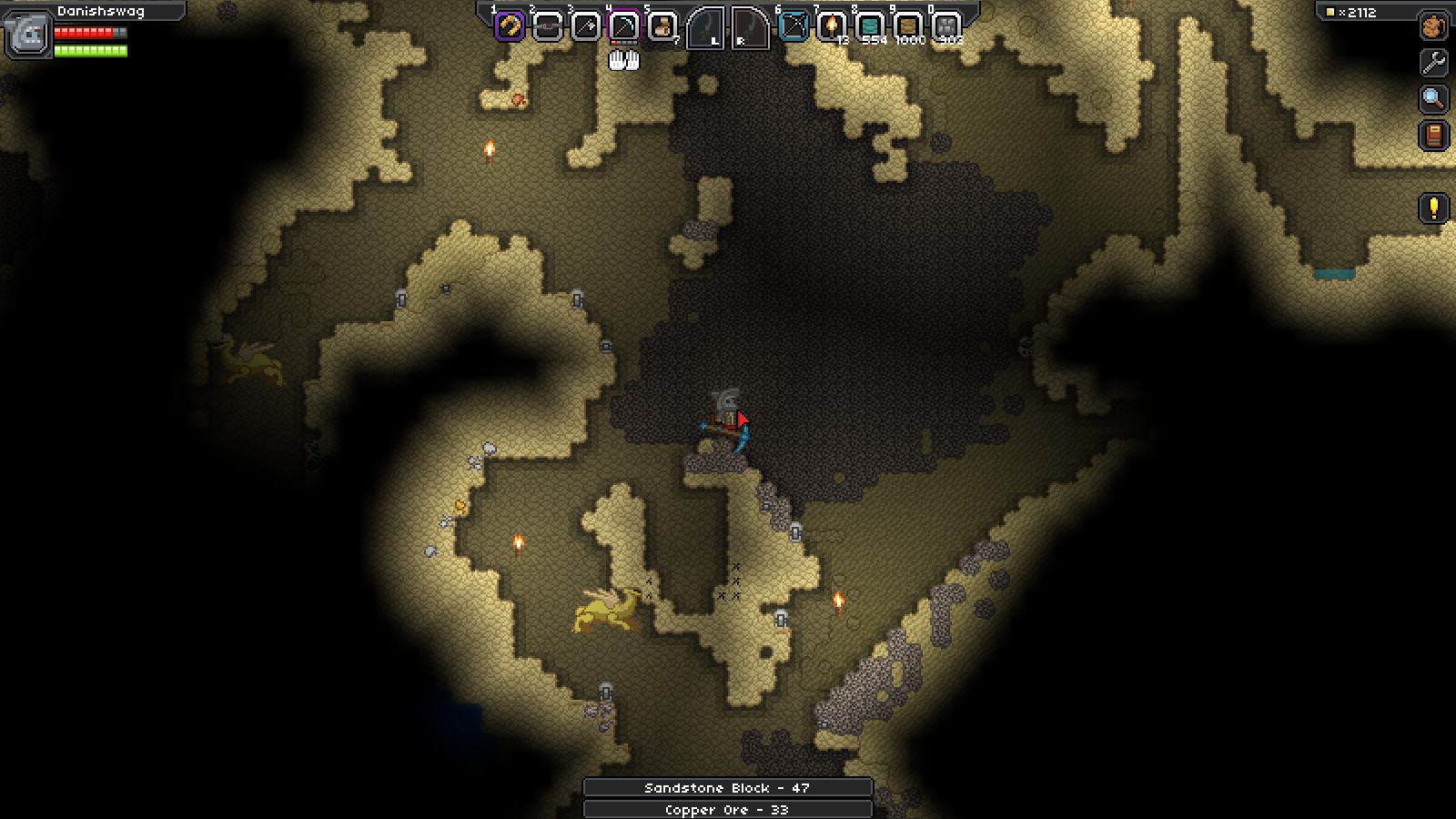 On these procedurally generated planets, there are tons of caves which you can explore. There are treasure chests placed randomly around, usually with pretty good loot in them, along with creatures and mini-bosses that you can fight. This is probably when the action got most tense for me; you have been digging and exploring a cave for ten minutes when a few monsters pop up to attack you with a lava flow behind you. You have collected all these pixels, and just spotted a huge titanium vein which you lose if you die.

Home is Where You Build It

Really though, what I find a ton of fun is the home building. I would not say it is the most realistic, no worrying about supports or structural (in)stability. You just place the blocks where you want along with the furniture you want. There are NPC villages throughout the game that you can raid to get statues and pictures, seemingly at no cost whatsoever. The easy building mechanics mean it is very easy to create the house that you want, and you will get almost all of the materials you want just by mining for ore. 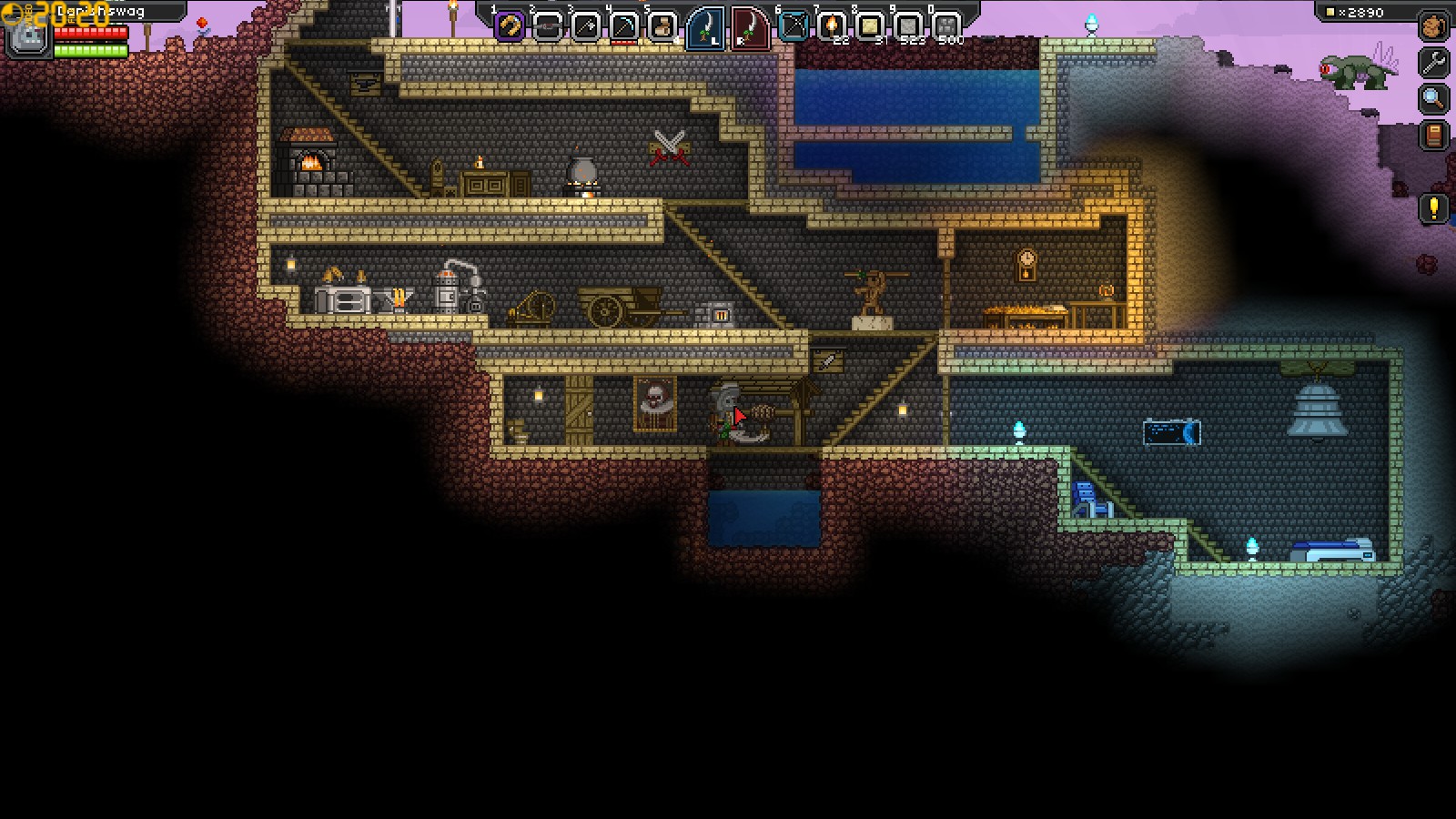 There are hundreds of little details in Starbound that will delight almost anybody who likes these sandbox games. My favorites are probably the "instances", which are generally things like APEX labs or pirate ships that show up at random places that you can explore knowing that nobody else will have quite the same experience. You can recognize the pirate ships by an anchor on the ground and if you build your way up to them you can usually buy weapons and blueprints from the pirates and loot all of their boxes and containers. This seems a bit funny given that all of the pirates I have run into generally say things like "Keep your hands where I can see them," but it is an endearing touch regardless. 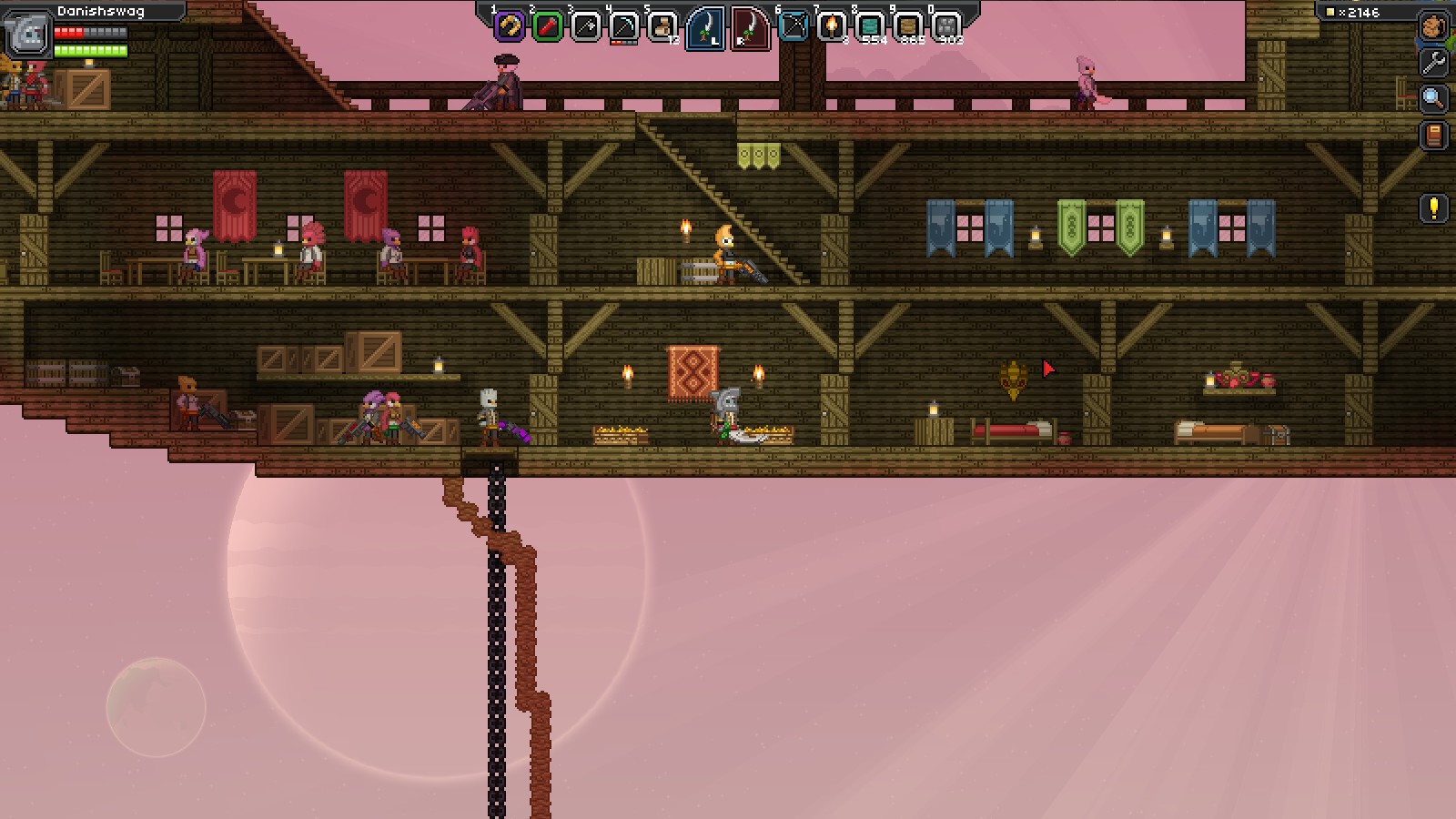 There are a few little quirks though. The combat is really nothing special. There are basically two kinds of close range weapons, pokers and slicers. Slicers do not have nearly as much range as pokers, but they slash vertically through the air while pokers just poke. Slicers would be swords and axes while pokers are usually spears. This would be all well and good, except you can not currently control the direction of the attack, so if you have a poker and an enemy is a little beneath you, there is no chance of hitting it at all. These weapons do cause a lot of damage, but I often found myself getting hurt because an enemy would charge from above or below, and I had no way to attack them in time.

The ranged weapons in the game also often leave something to be desire. All guns and most bows require energy (the green bar) to use. They are also a little underpowered most of the time which meant I was forced into close combat. For a game that is pretty good at letting you choose otherwise, this is just a minor pet peeve and there has to be some risk of getting hurt to make it interesting. I will admit that sniper rifles are usually best causing a lot of damage with not too much energy, although the slow reload times limit their usefulness. Before anybody goes yelling "BUT THER AR ROCKT LANCHRZ", the really interesting weapons are mostly in what you can loosely call the endgame. Bows in particular are very awkward to use which makes it a little annoying to hunt in the early game. Since hunting is the best way to get raw alien meat, which is the only way to live early on, it is a little annoying. That goes away later on though. 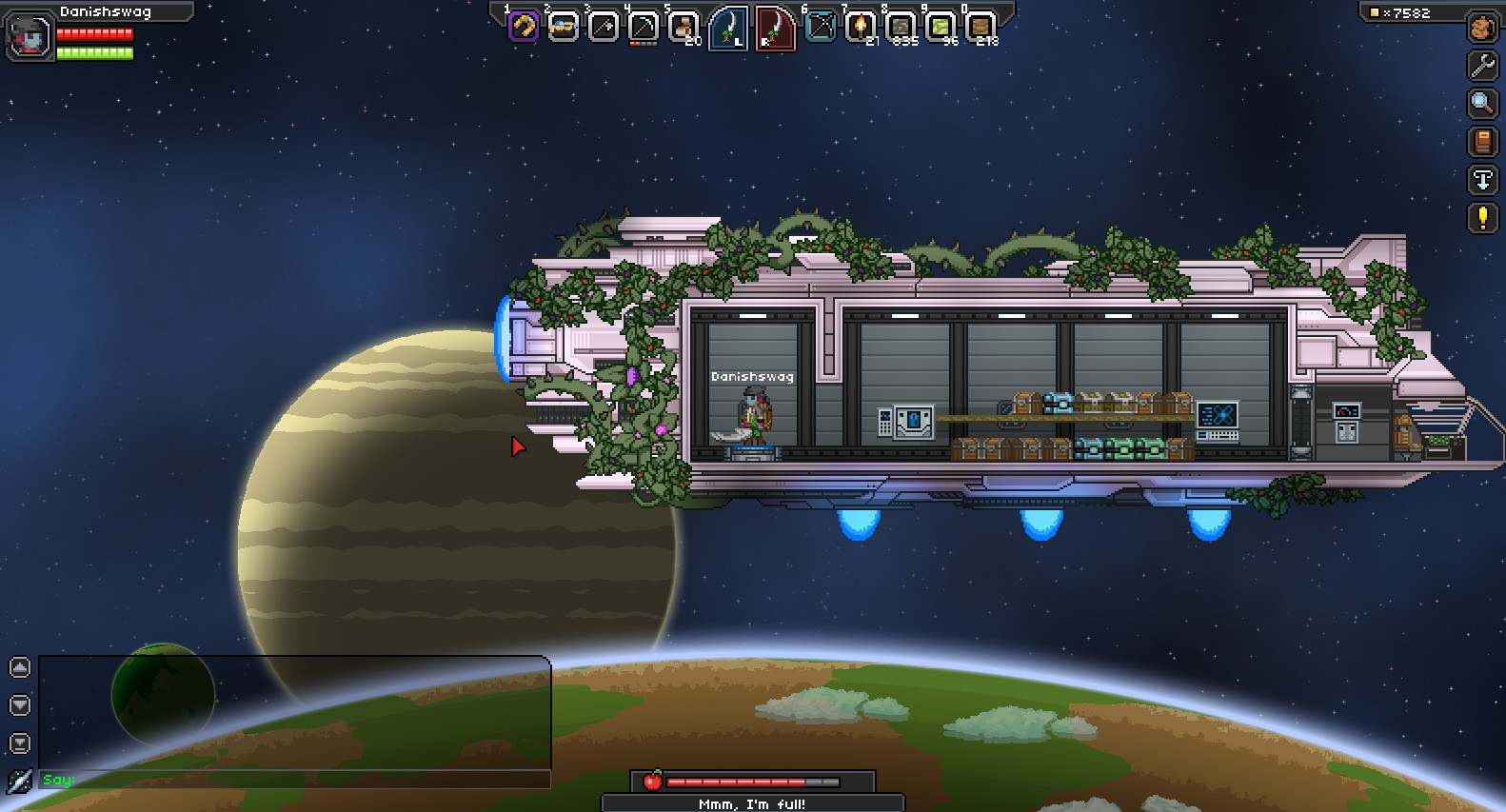 While there are some quirks, this is most certainly still in Beta. While I write this, supposedly there will be no more character wipes and only one more planet wipe. The developers are still adding content on a regular basis, and even just a few days ago they added some Valentine's Day special items (yes, they apologized for it being late). Furthermore, despite the Beta status, the game only crashed once while on the Enraged Koala version. Overall Starbound is a delightful game that you can easily sink hour into and only feel like you have scratched the surface.

Really though, the most important question is "Should I buy it?" While I am sure there will be Steam sales later on, the game only costs $14.99 to begin with, so it is not going to break the bank like Titanfall would. If you liked Terraria, then this is a no brainer from what I have heard. If you like Minecraft, it is also probably worth a shot. If you liked LEGO as a kid (or if you like it as a grown adult), then I would say look up a couple videos on YouTube and see if it looks interesting to you. Most importantly, if you value your free time, stay far far away.