I recently moved into a new apartment in New York City and decided this was a good time to set up a reliable and fast internet connection. Thanks to a mix of Ars Technica, Google, and a short background as a lab manager that makes me far too confident, I decided I had finally figured out what hardware to use for my apartment, but first...

Nobody really likes Time Warner Cable (TWC) very much, but they are the only providers for the vast majority of buildings in New York City. I went ahead and got the $54.99/month 'Ultimate' service to get speeds of about 200/20. I saved a lot of money by purchasing my own modem which got rid of the $10/month rental fee. There is absolutely no reason to pay it, and all I had to do to activate it was plug in my computer with an ethernet cable and try to go to any website. I decided to be a little future proof and bought the Arris SURFboard SB6190 which supports speeds above 1 gbps, which should be plenty for me. The modem will pay for itself after one year, and nobody out there should ever pay that rental fee. As for TWC, I have not had any problems with them so far although we will see how things go when my one year contract is up. 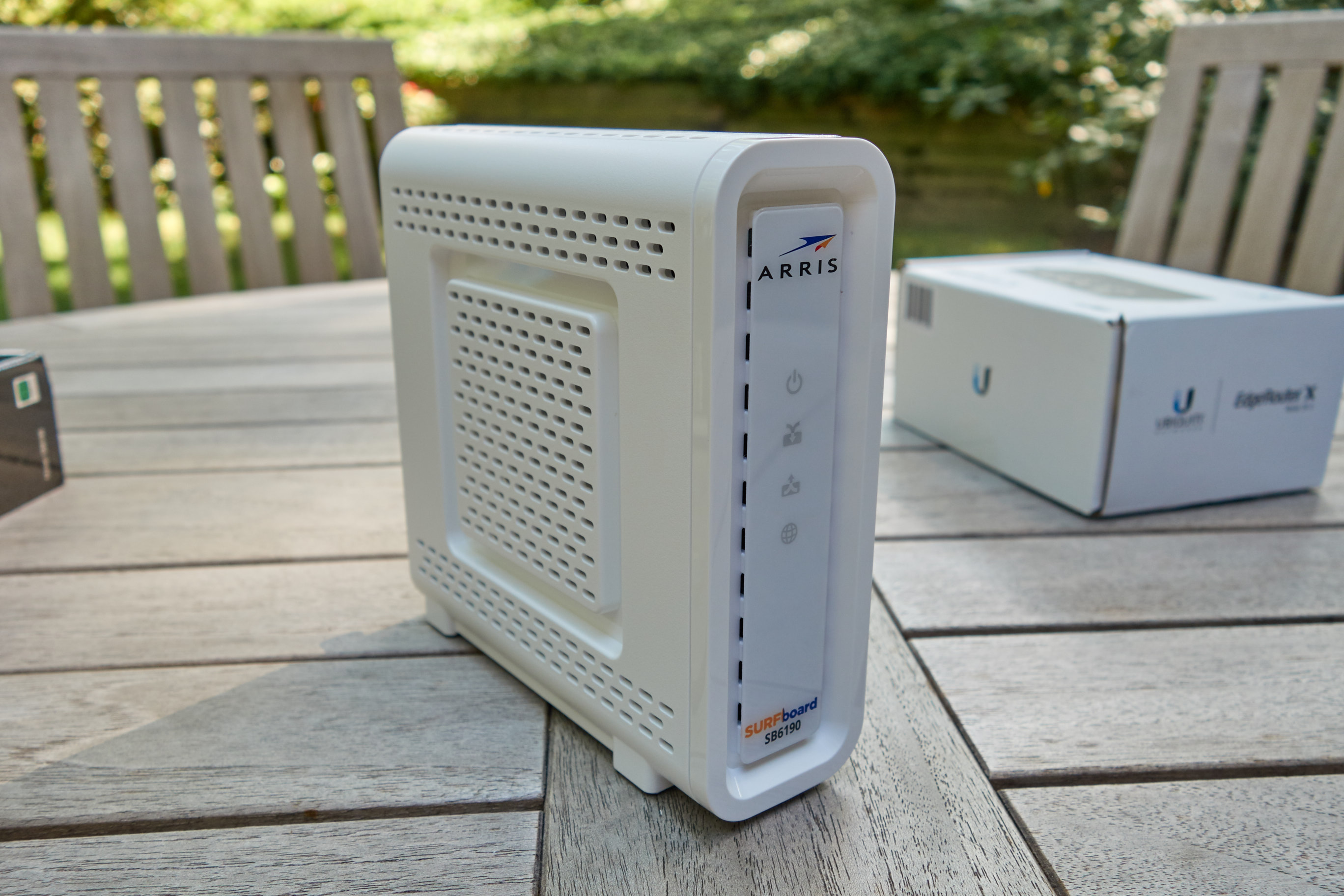 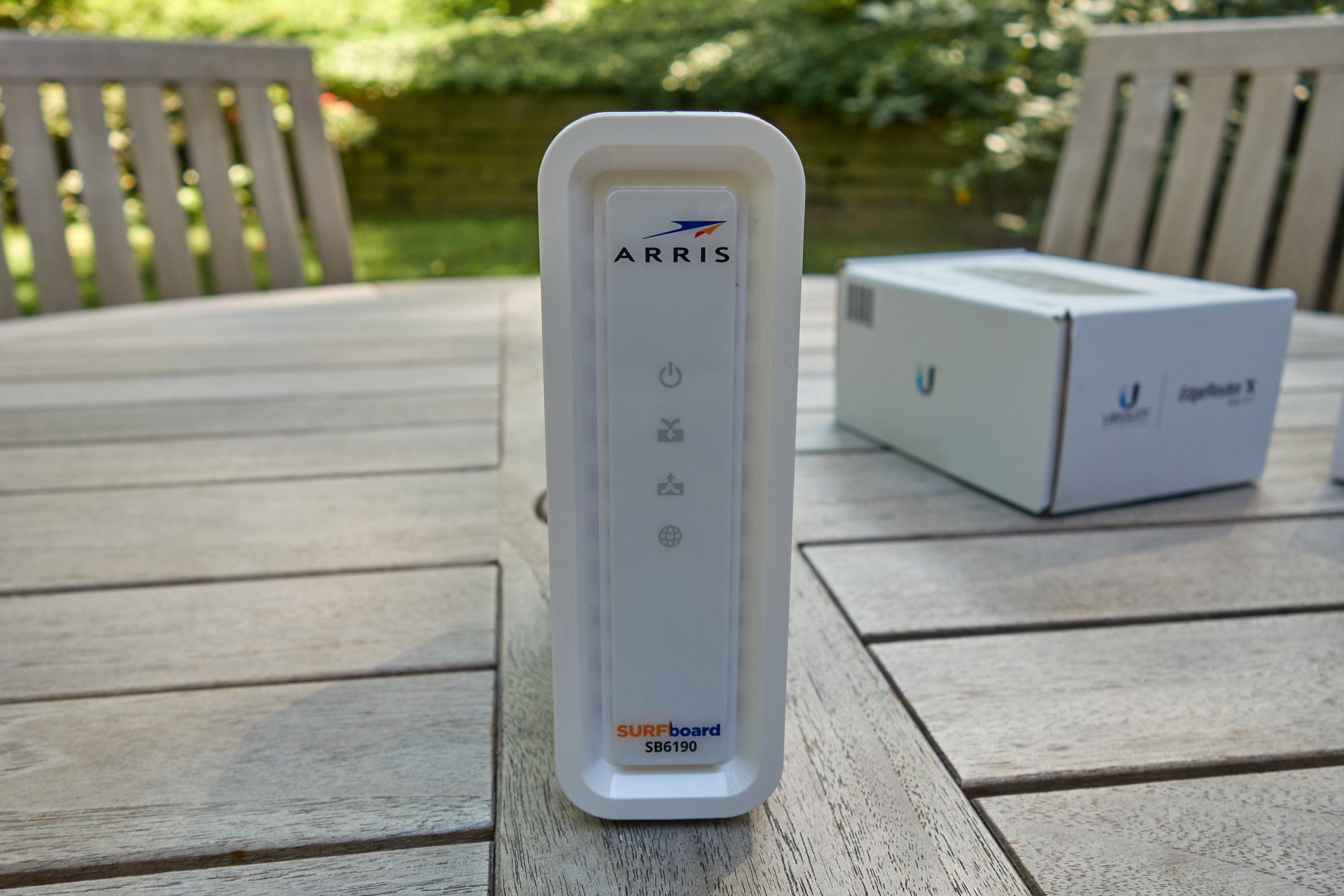 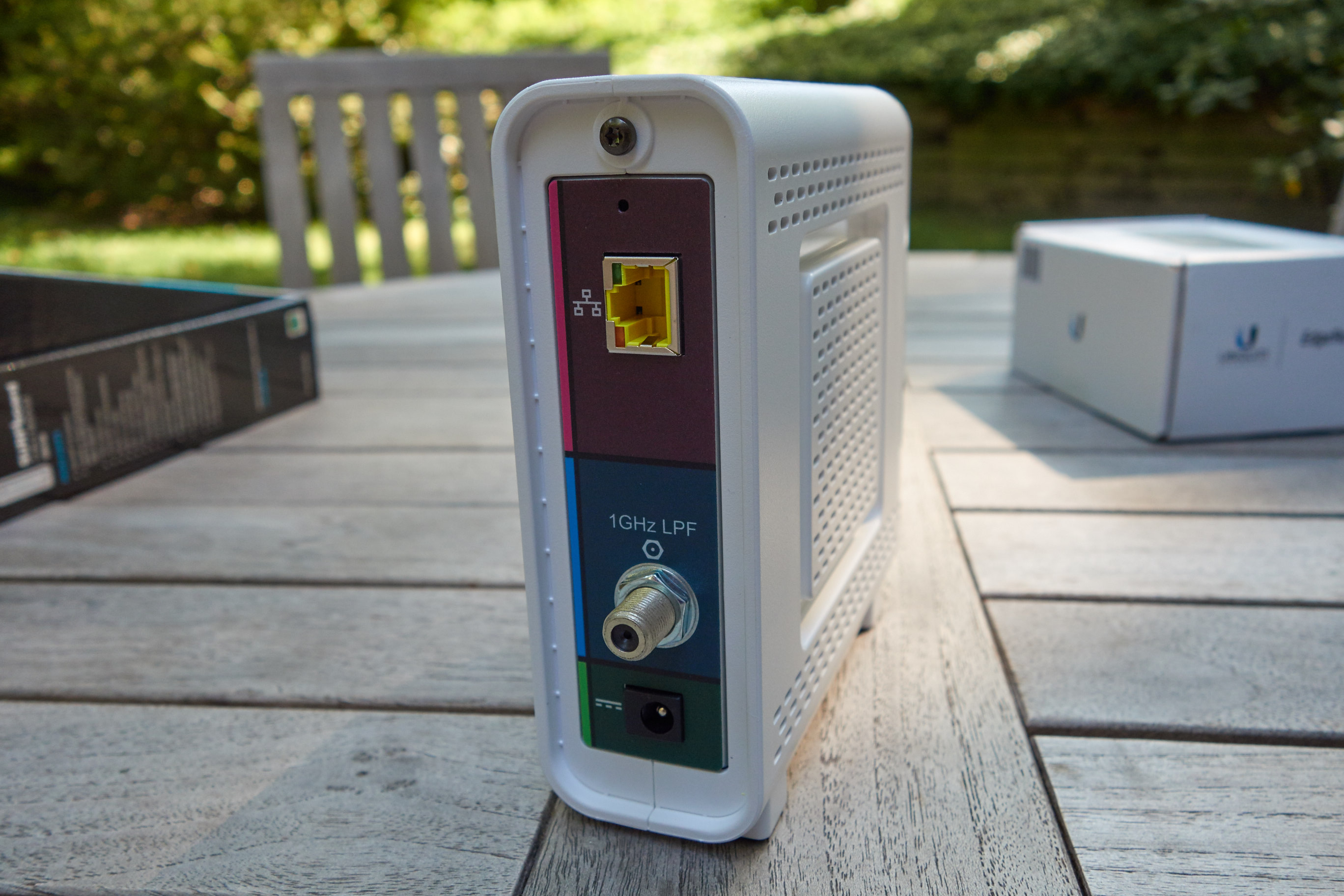 Unfortunately, I wasn't able to capture many screenshots from the TWC set up process, but it really was not much more difficult than plugging it in and trying to access a webpage. As usual, I just went to a non-https site so the browser wouldn't freak out (Ars Technica still doesn't use https so that would work). I didn't take any speedtests plugged directly into the router either, but I haven't had any need to reboot the device yet which is a good sign. 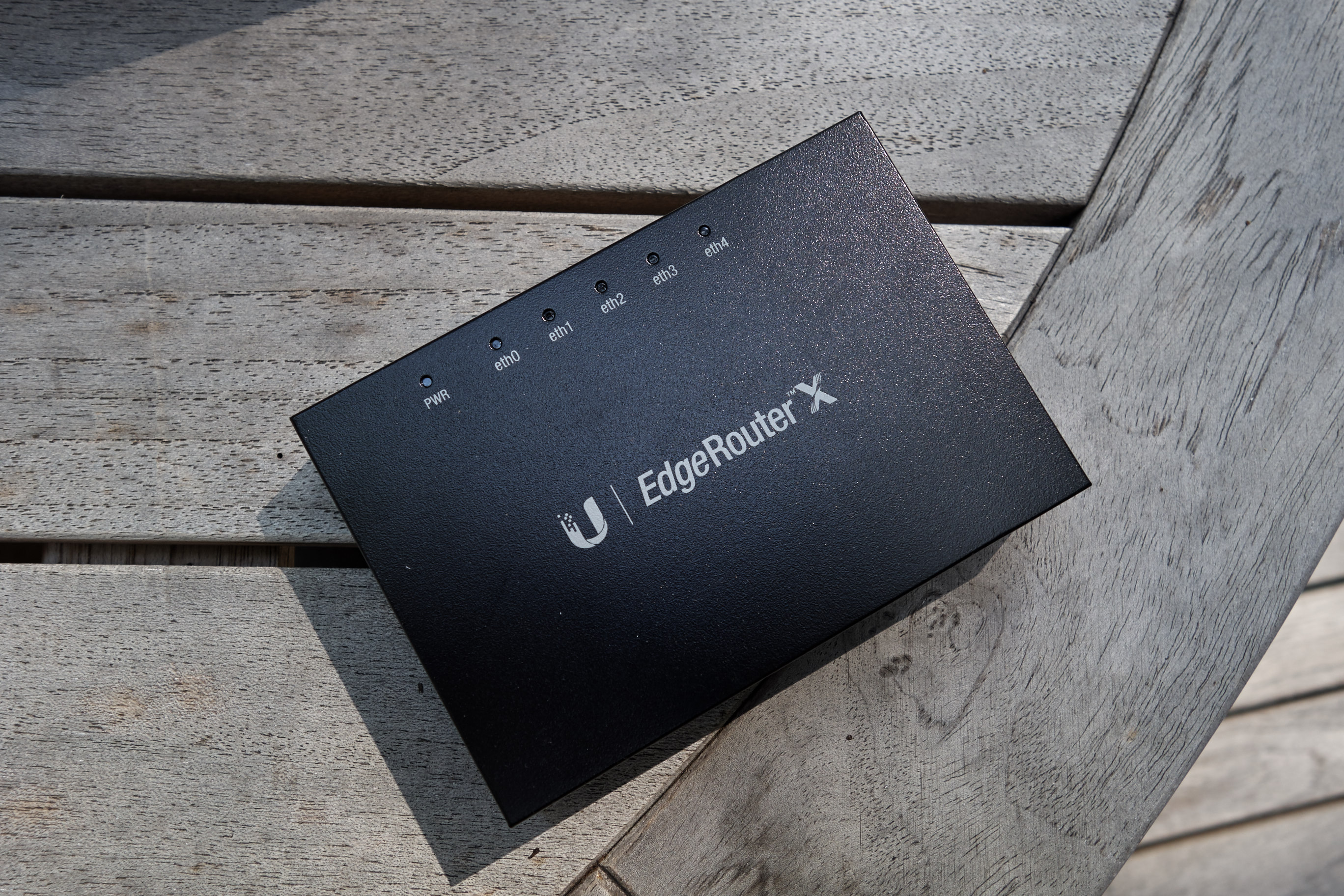 After taking everything out of the box, I plugged the Edgerouter X into the wall via the included power adapter. After messing around with the internet plugged into eth0 and my desktop plugged into eth1, I realized you need to plug the desktop directly into eth0 for setup. I also had to set a static IP address in order to connect to Windows 10. If you're curious, my settings were

To connect to the router, I connected to https://192.168.1.1 which threw up an error saying the certificate isn't trusted. After clicking through all of the warnings I reached the login page. 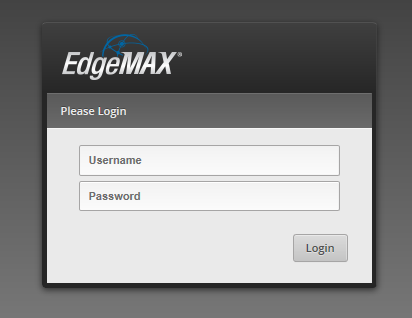 In order to login for the first time, the default username and password are:

This brought me to the following dashboard screen. 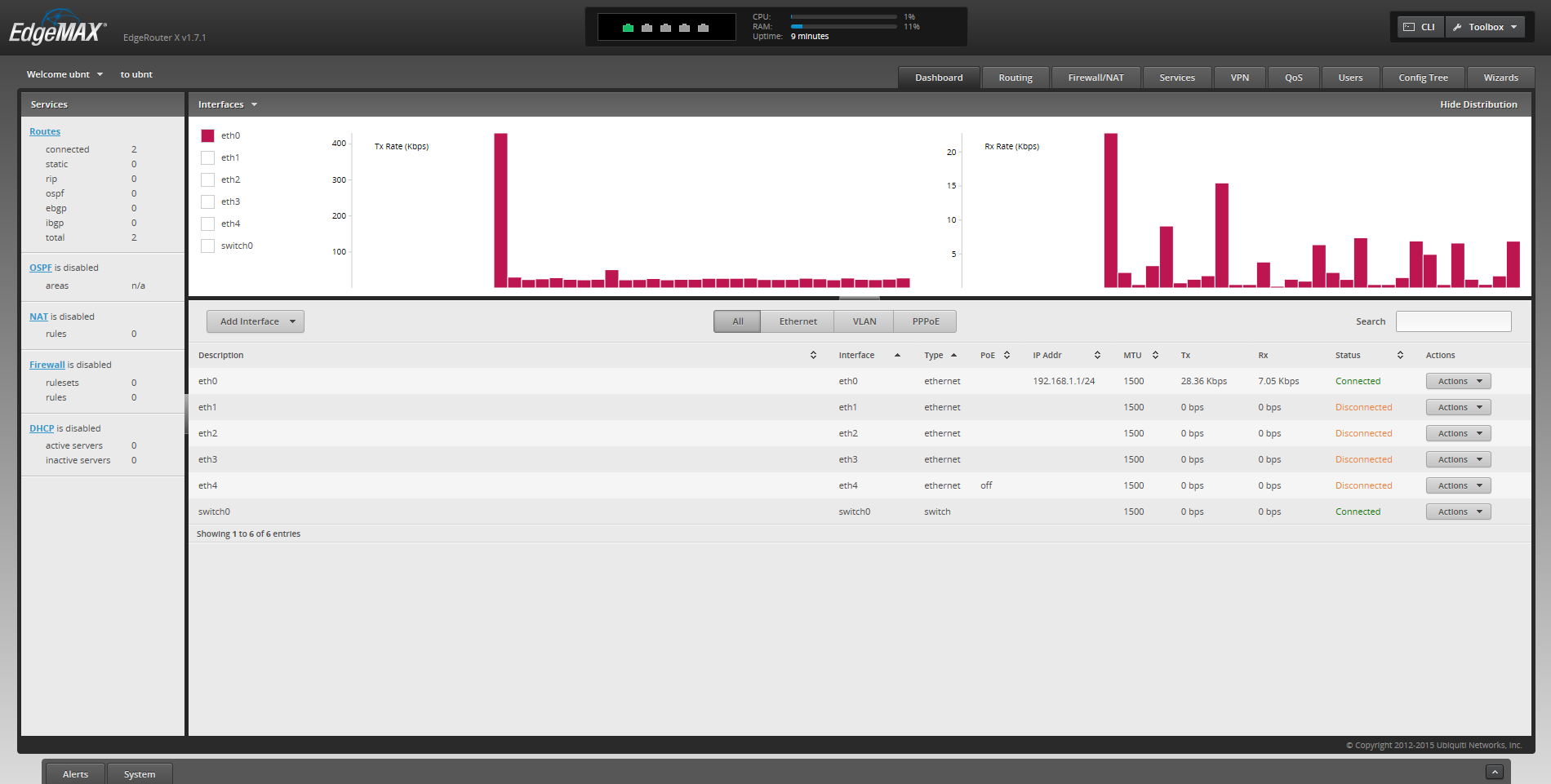 Now I needed to actually set up my router. Since I'm not exactly a networking expert and I didn't need multiple subnets I went ahead and used the Basic Setup wizard from the Wizards tab on the top right of the EdgeOS dashboard page. After rebooting the router I plugged in my modem to eth0 and my computer into eth1. It worked! The speed test actually logged over 200 mbps plugged directly into the router. Originally I planned on setting up QoS as well, but I have yet to find it at all necessary as I haven't had any issues with video chatting or in any online games. Other than downloading Steam games, nothing has been able to saturate my internet connection fully. 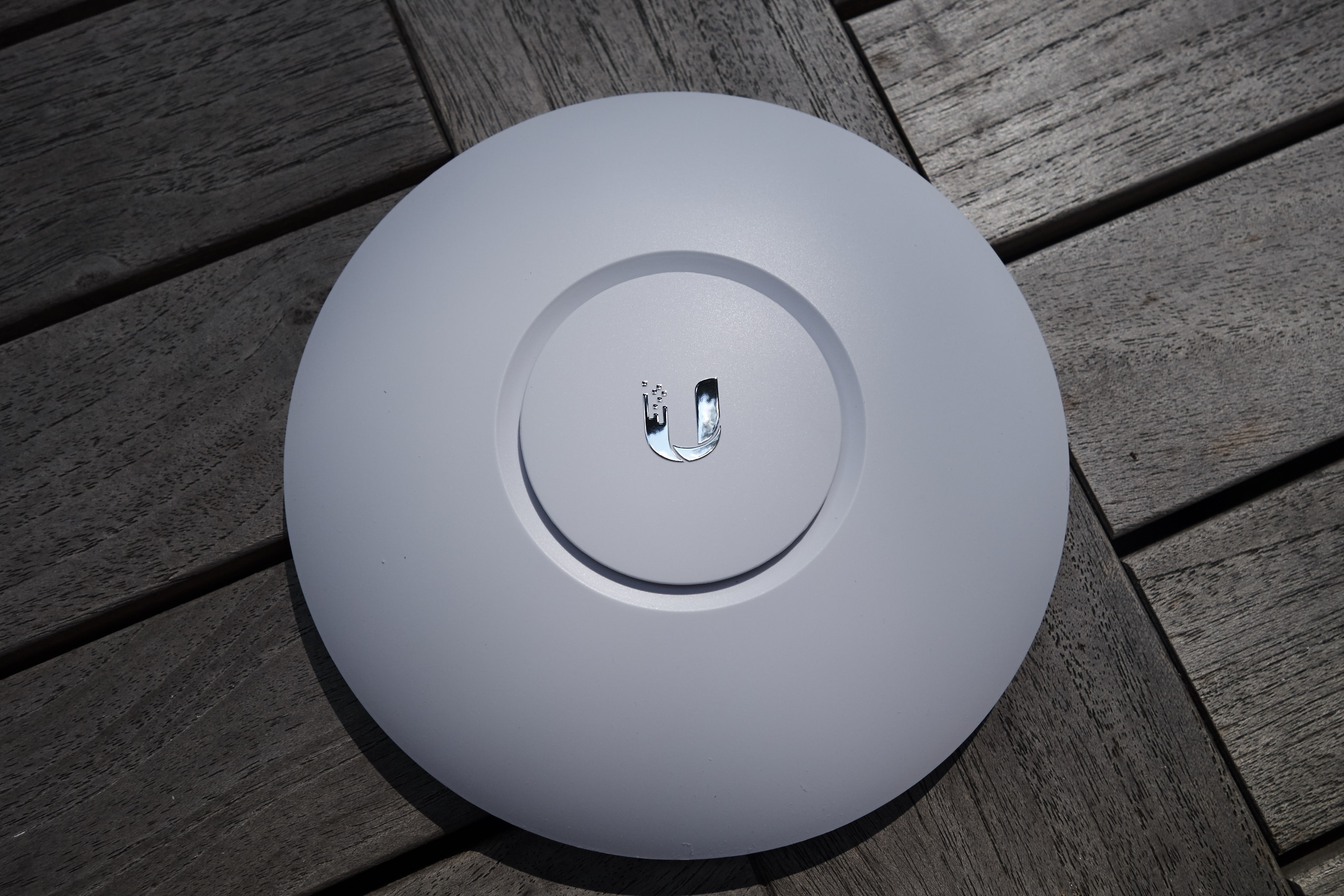 Setting up the UniFi AP AC Lite (from here on out, just the AP) was tremendously easy with their UniFi Android App. Typically, most people using this AP would just use the java app that runs 24-7 on a server. Running the app on your headless server gives far more options for provisioning your AP, although you can set up WPA2 with a combined 2.4 and 5 ghz network. Since I am not a network engineer, I mostly just miss being able to whitelist MAC addresses, although setting up a guest network would be nice too. You can apply a firmware update through the Android app which is pretty cool. So far, the AP has held up great without a single hiccup, although we have never had more than eight devices connected, and never more than two streaming at the same time.

In order to see how fast the Wifi was, I disconnected all other devices from the network, unplugged my desktop from the router, and I was able to get wonderful speeds. The 236.43 in the photo below was only about 1 mbps slower than connecting directly to the router, and the ping was only about 3 ms worse. Obviously I didn't repeat tests scientifically, but this is still a great sign.