I was recently visiting a friend in Detroit and I was curious about whether the 'Michigan Left' was actually the safer and more efficient solution that Michigan's Department of Transportation (MDOT) claims it is. If you haven't been to Michigan,

A Michigan left is an at-grade intersection design which replaces each left turn with a U-turn and a right turn. The design was given the name due to its frequent use along roads and highways in the U.S. state of Michigan since the late 1960s[1].

The design is meant for intersections where at least one road is a divided highway or boulevard[1:1]. The driver can't turn left either onto or off of the divided highway, which makes it difficult for out of state drivers[2]. The author of the Michigan Highways webpage, Chris Bressert, boldly asserts

If Michigan Lefts were truly judged to be more dangerous or ineffective at their purpose, why are they still proliferating a half century later? And why are so many more states and other nations around the world using them or slight variations of them? Hmmm...[2:1]

Beyond the logical fallacy that engineers wouldn't use them if they weren't the best option, I am also not convinced I believe they are the best choice outside of very specific situations. Before anything else though, we need to dive into the actual layout of a 'Michigan Left Turn'. 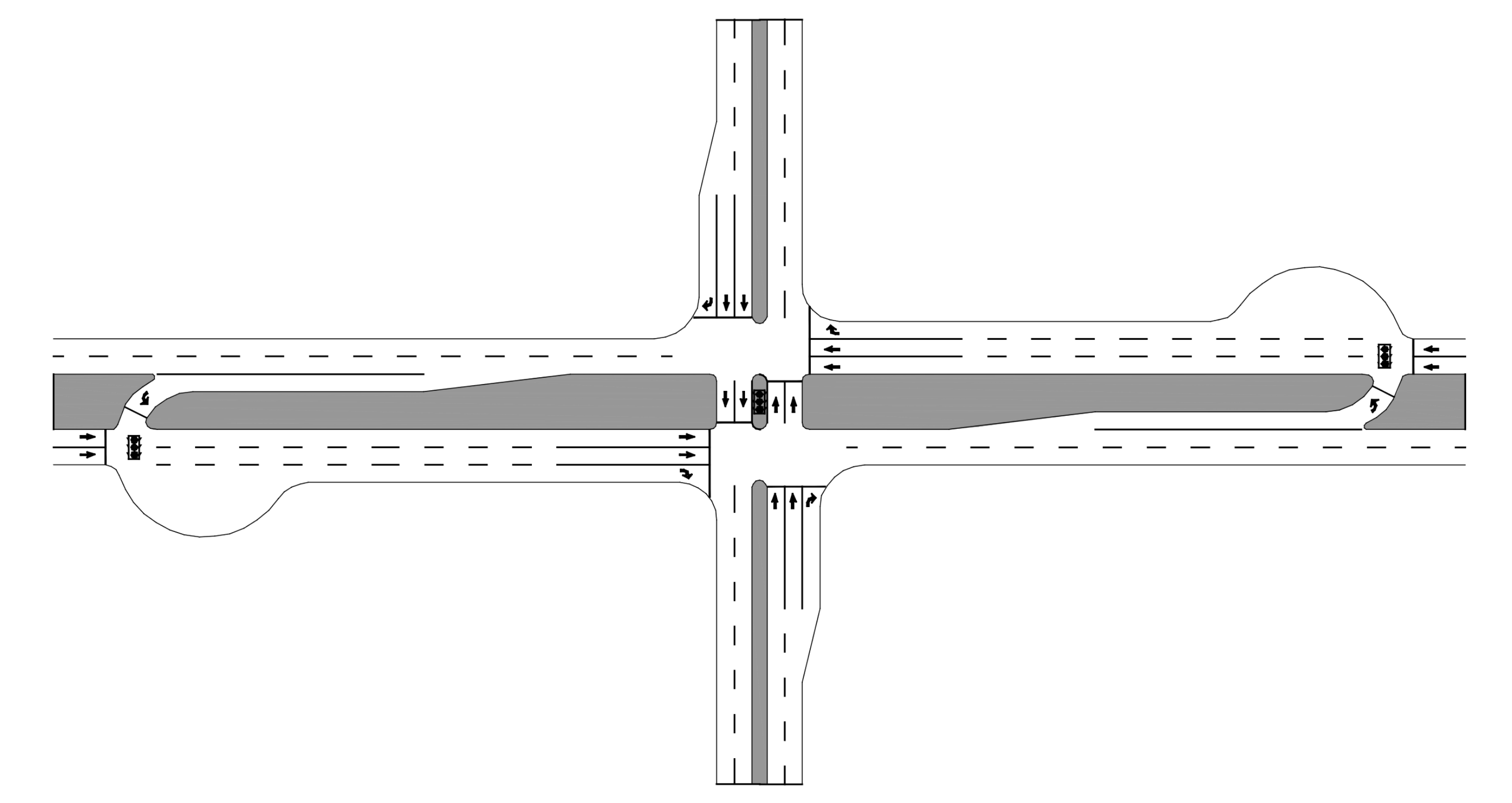 The layout in the picture above is hopefully pretty clear. In theory it leads to fewer accidents and the accidents that do occur are less severe[2:2]. While the distance between the U-turn and the intersection depends on the Annual Average Daily Traffic (AADT) and the size of the median, the recommended distance is between 400' and 600' (~122-183 m). The left turn bay is usually 250' (~76 m) long with a 50' (~15 m) taper[3]. The design on most major roadways is big enough for a 77' truck although it only fits a 55' truck in residential areas[3:1].There are some other intricacies, but the biggest issues is that as an out of state driver the signage can be pretty lacking in Michigan[4] despite what MDOT says[5].

In 2007 El Esawey and Sayed found the performance of an 'Unconvential Median U-Turn' to be lower than a standardized four way intersection in Cairo, although they found the conventional design similar to a Michigan Left did improve capacity compared to a normal four-way intersection[6]. They both analyzed U-turn intersections in Cairo and modeled them in VISSIM. The authors note lane discipline in Cairo is particularly bad, which makes the results less applicable to the United States.

In 2000, Levinson and Koepke wrote a summary of Michigan Left Turn design and did a light analysis of some safety data[7]. The results showed about a 20 percent capacity gain compared to an intersection with a left turn phase. However, their literature review only found four studies that looked at Michigan Left turns. Overall though, the evidence they cite makes it clear there are clear capacity advantages to these types of intersections. The results also suggest safety improvements resulting in about a 20 percent reduction in vehicle crashes, although this is purely based on the reduction in the number of conflict points.

Beside the lack of really conclusive research I came across about the safety benefits of these intersections, the intersection design presents some other problems. The biggest issue in my mind is that the design is meant for a split highway with a very large median. I would also worry about queuing when there are a significant number of people who want to turn left. Furthermore, adding the large widths of the median reduce walkability significantly.

Overall, I found this literature review very aggravating, and it probably showed throughout this post. I was expecting to find studies that would show that the Michigan Left Turn is great in simulations and theory but does not provide adequate advantages in practice. The research on this type of intersection is sorely lacking academic research and the engineering documents from the FHWA and MDOT were very dry, uninteresting, and relied on only a few key studies. The safety and capacity benefits do seem to be significant, but the intersection is only applicable in suburban areas with low land costs, high vehicle throughput and a minimal number of left-turning vehicles. So is the Michigan Left actually better? Yes, but only in the right situation.