Recently I was going through downtown Chicago and I noticed a variety of different designs for the bike lanes around the city. While I love the efforts the city has made to becoming more bike-friendly, I noticed a lack of consistency between the signage, symbols, coloring, and layout of different bike lanes. This is by no means an official design code. Instead, I thought it would be interesting to learn what good design for bike lanes actually is, and where the biggest mistakes are. Diving in,

Why do we care?

Well, if you are a accept the scientific evidence of global warming, this is a pretty easy one. The European Cyclists' Federation (ECF) has a very comprehensive study (admittedly from a potentially biased source) on the carbon emissions of bicycles relative to other modes of transport. They correctly do not portray cycling as a zero carbon option, since it takes raw materials to create the bicycles as well as food to fuel anyone riding one (although if you get the same amount of exercise other ways to stay fit, then this is less of a issue).

ECF's Carbon Footprint numbers cite the Netherlands Organisation for Applied Scientific Research (TNO), assuming "the average commuter bike weights 19.9 kg (~43 lbs.), is composed of 14.6 kg aluminium (~32 lbs.), 3.7 kg steel (~8 lbs.) and 1.6 kg (~3.5 lbs.) rubber and that the bicycle will last 8 years and cover a distance of 2400 km (1490 miles) each year." (ECF). Unfortunately, I couldn't find an English version of TNO's 2010 report, but this translates to about 5 grams of CO2 per km. If anything, that bike seems a little on the heavy side for a new bike, but it's usually best to err on the conservative side to reduce the number of things someone can critique.

This number is much harder to estimate given that it is so dependent on the diet, metabolism, weight, genetics, and bike efficiency. Assuming a reasonable travelling speed of 16 kmh (~10 mph) leads to a calorie burn of 4 kcal/kg/hr. This means an adult weighing 70 kg (155 lbs) would burn 76 kcal/hr more than they would driving. This means that for every km, the average adult would have to consume an extra 11 kcal/km. To look at diet, the ECF cites some numbers from Small World Consulting about the average emissions from a standard diet in the UK. It all comes to emissions of 16 g CO2/km. All told, this gives 21 g CO2/km.

To quote a flat number for passenger vehicle emissions, the ECF uses STREAM and EPA numbers to arrive at emissions of 192 g CO2/km for regular passenger vehicles, of which 42 g CO2/km is from the production of the vehicle. This is important, because even if electric vehicles get their electricity from renewable sources, these emissions would still exist unless factories also switch to renewable sources of energy. Clearly, biking is better for the environment from a purely objective standpoint, although I admit I didn't fact-check the ECF's document beyond looking at the .

Incorporating Dutch and Danish Practices into the U.S.

For a good primer, I really recommend just watching the video below. It's about 2 minutes long and gives an overview of intersection design from the Dutch design manual. This gives a pretty good idea of how to handle intersections on roads with traffic signals.

The two biggest takeaways for me are that this design makes sure to minimize conflict points that rely on drivers to check blind spots and to separate moving vehicles, bicycles, and pedestrians as much as possible. However, in the Netherlands drivers are not allowed to turn right on red. In this intersection, a driver who pulls forward to try to turn right on red takes up all of the crosswalk as well as the bike lane. While pedestrians can easily walk around the car (like I normally do every day in Chicago), bicycles travel much faster. While you can get rid of turning right on red, anyone can attest to how annoying it is to sit at an intersection and stare at the red light while there are no vehicles on the crossing road. With good sight lines and an extra sign reminding drivers they need to stop and yield to pedestrians/bicyclists (most drivers don't), you can still maintain right turn on red during off-peak hours. To look at a little more detail, consider the good-looking but difficult to understand infographic below from Copenhagenize about Danish bicycle planning.

Under Danish guidelines, roads with speeds below 30 kph (a bit less than 20 mph) are find with shared use between bikes and vehicles. In the Danish context, these would usually be suburban roads that get very little vehicle traffic and the skinny roads keep vehicle speeds low. From 30 to 65 kph (20 to 40 mph), you should have one-directional bike lanes on each side of the road separated by parked cars that are painted differently from the road. Usually you also need a visual barrier (think plastic posts that are cheap and easy to replace) to prevent vehicles from parking or idling in the bike lanes. Once vehicles are traveling faster than 45 kph (~28 mph), you also need to have a real curb made of concrete or some other material. Finally, for speeds above 65 kph you really need completely separated bicycle lanes. Collisions at speeds above 65 kph are going to be very serious for any cyclists. This is another issue when adapting designs to the U.S. context because roads with 65 kph speed limits are almost always going to be in rural areas where there is enough space for bicycles. In the U.S. roads with speed limits around 40 mph often have strip malls and even houses on the sides from which it is very expensive to purchase land.

In the U.S. it is also very common to have the bicycle lane cross over the right turn lane so it can continue going straight. While this is no longer in most state DoT's design manuals, it is still an issue that needs to be rectified as it means that drivers need to check their blind spot before turning right. Given drivers often don't do this even before just switching lanes on the interstate, this is a big concern.

Furthermore, it is important to leave a buffer between parking spots and cycle lanes so that passengers don't accidentally open doors into oncoming cyclists. Education and rule enforcement are also crucial, (warning: anecdotal) since U.S. cyclists do not follow rules of the road very well. I have a friend who actually quit a cycling group he really enjoyed simply because the cyclists pressured him into riding straight through stop signs without even slowing down. Where I grew up, there was a cycling path completely separated from the road by several feet of grass. Commuting cyclists would prefer to ride in the road with a free flow speed around 40 mph instead of using the bicycle path. Along this path, there was an intersection with big signs saying that bicyclists need to dismount before crossing. I personally witnessed two to three collisions per year at this intersection during rush hour because drivers expected cyclists to stop and they didn't.

While researching this article and spent a lot of time Googling to try and find specifics for European designs in English or for American designs that are more up to date than the early 90s. At a talk on the future of transport and the role of cycling, Professor Kevin Krizek mentioned NACTO (National Association of City Transportation Officials) which has apparently been very aggressive pushing bike-friendly street design. The guide costs $50 in either hardcover or e-book form, although I believe it is entirely available on their website.

While you can go to the website for more details, there are some basics for just a standard bike lane adjacent to a road. A lane should ideally be 5 ft wide, with a minimum ridable width of 3 ft. If the lane is next to a parking lane, the total width should be 14.5 ft, and at least 12 ft minimum, with a focus on making the bicycle lane as wide as possible. You also need to add 2 ft if there is a hard barrier next to the bike lane since cyclists do not want to ride directly next to them. 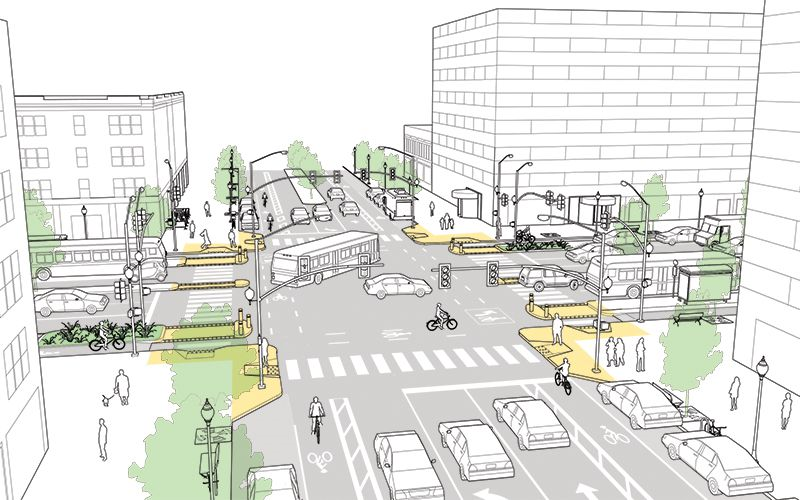 The biggest issue is that for intersection design NACTO recommends using a Two-Stage Turn Queue Box and Intersection Crossing Markings for major intersections. This ignores the ideas coming out of Denmark and the Netherlands which use a separate signal for the bike lanes and protect them more as in the video above. I admit, in much of the United States, bicycle use is lower than in major cities in either of those countries so phase design for bicycles may create undesirable queues and delays but it is still an issue. NACTO also does not have any treatments for roundabouts, which is also a big problem. Also, NACTO's design recommendations for major intersections cuts down on the number of available lanes which is very, very unpopular in the United States as Montgomery Country's Department of Planning found out recently when trying to implement a BRT project.

Moving forward in the United States, it will be critical to plan for bicycles and pedestrians when rebuilding roads and developments. Once governments build the roads, is very hard to introduce this infrastructure once developments are in place. It will also be important to increase urban density for sustainability purposes, and providing easy bicycle access to offices and stores is a good way to reduce carbon emissions and vehicle congestion. While the weather in the Netherlands or Denmark is also very amenable to cycling regularly (temperature-wise at least), this does not excuse poor urban planning practices that continue to cause issues in this country.