I was recently visiting my girlfriend in Germany since she's there for the summer doing research in a small town called Marburg. Over the weekend we went on a trip to Prague (which was amazing), and were on our way back on Czech Airlines. The plane landed in Frankfurt 20 minutes late. Through a long set of bad coincidences, instead of arriving at around 21:40 as we had planned, we didn't get back to her apartment until 00:45.

We arrived at Frankfurt station with about 3 minutes before the train to Marburg took off. We got to the ticket machine and were looking at the different train times. Another train was going to leave an hour from the one we were about to miss, and another a half hour after that. I then noticed the travel time was over an hour longer than they were supposed to be. They were doing track maintenance and starting at around 21:00, so we would have to take a bus between stations. This isn't completely unheard of, particularly for late trains without too many people on them. Track maintenance is a necessary annoyance.

Since we couldn't make it to the first train, we sucked it up and bought a ticket for a train that said it would take 2 hours and 18 minutes. This was pretty annoying, but my girlfriend and I said alright and decided to go and get some food. We tried to keep track of everything on the DB Bahn website while eating a burrito, and went back to the platform.

So what's particularly weird about this story? Well, since doing track maintenance late at night with a replacement bus is pretty normal, I thought they must have looked at ticket numbers and decided that there are usually so few people that it's a good time to take the train off of the track. Well, this was definitely not the case. The train was so full that people were still standing up. On a regional train.

So we get back to the platform after a really good burrito, and wait there. The train with a 2 hour and 18 minute trip is now delayed by 45 minutes. There is another train leaving at 21:52 which is supposed to take less time, so my girlfriend and I just got on that one so that we could charge our phones and get a place to sit. This turned out to be a great idea on her part, because the first train was just cancelled and everybody was told to get on ours. On the second train, here is what our path was supposed to be. 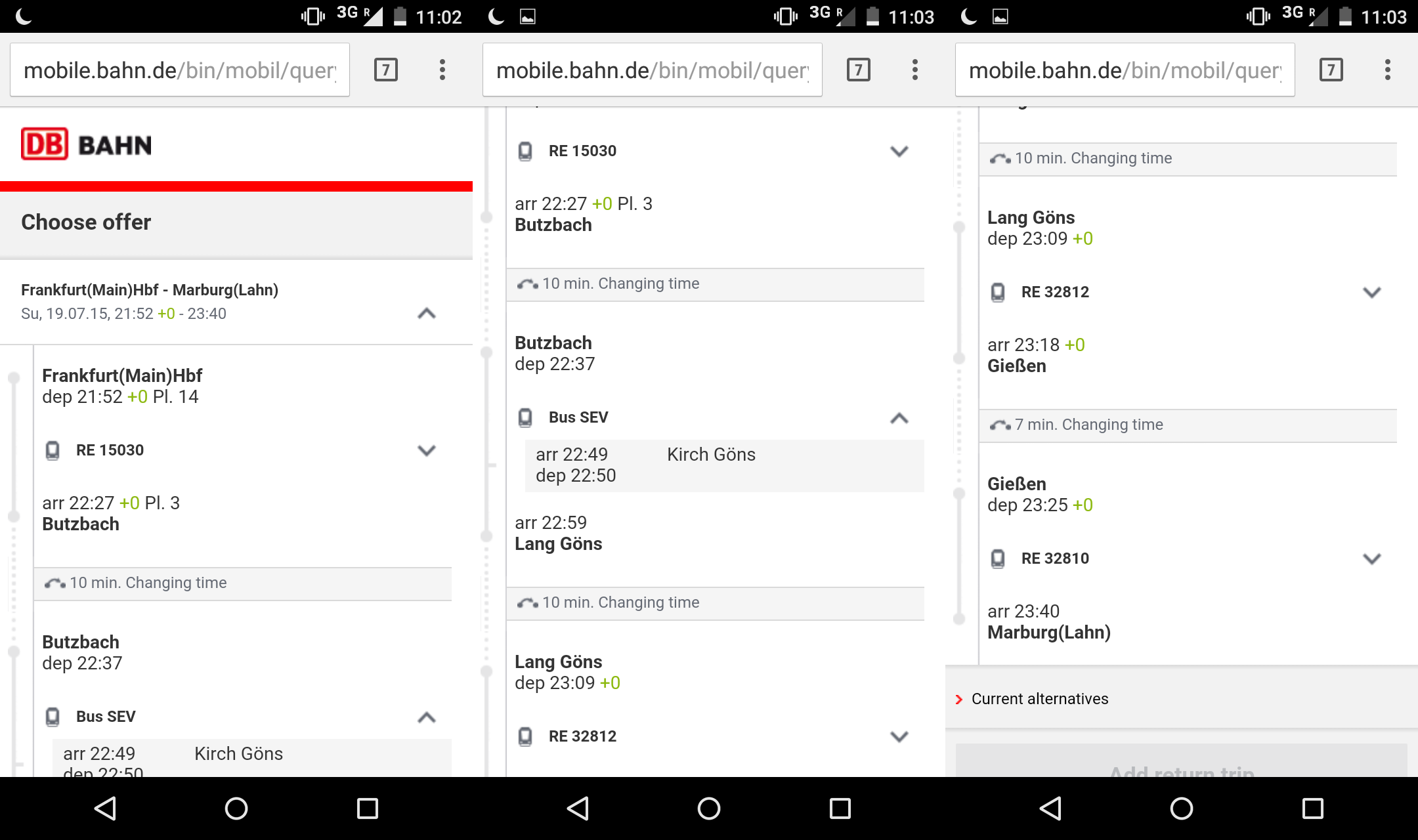 The trip started with a train to Butzbach, then a bus to Lang Göns, Then another train to Gießen, then another train to Marburg(Lahn). So we sucked it up and started on our journey, which went fine all the way until our first stop at Butzbach. We got off the train, and the first replacement bus was already completely full. The driver looked pretty freaked and was yelling on the phone to someone or another. A full accordion bus saying out of service pulled up and opened the door to let off the passengers. The mob just assumed it was another replacement bus so everybody started to get on. The driver just shook his head with an angry look and went and talked to the other driver.

After awhile, he came back and we all got on the bus. At this point, we've filled up one regular bus, a full accordion bus, and another 20 passengers are still waiting outside. Clearly Deutsche Bahn didn't plan appropriately. Or barely at all. There's always the possibility that for whatever reason, a lot of people were travelling that weekend. Closing down a regional train on a Sunday night already seems a little silly for the weekend travelers, but maybe they had a good reason. It turns out my girlfriend takes the route all the time, and they started one train too early. The train is normally packed like that at 21:30, but the 22:30 train only gets 10-20 people.

We arrived at Lang Göns, and got on the train to Gießen. We looked at the DB Bahn website and see this. 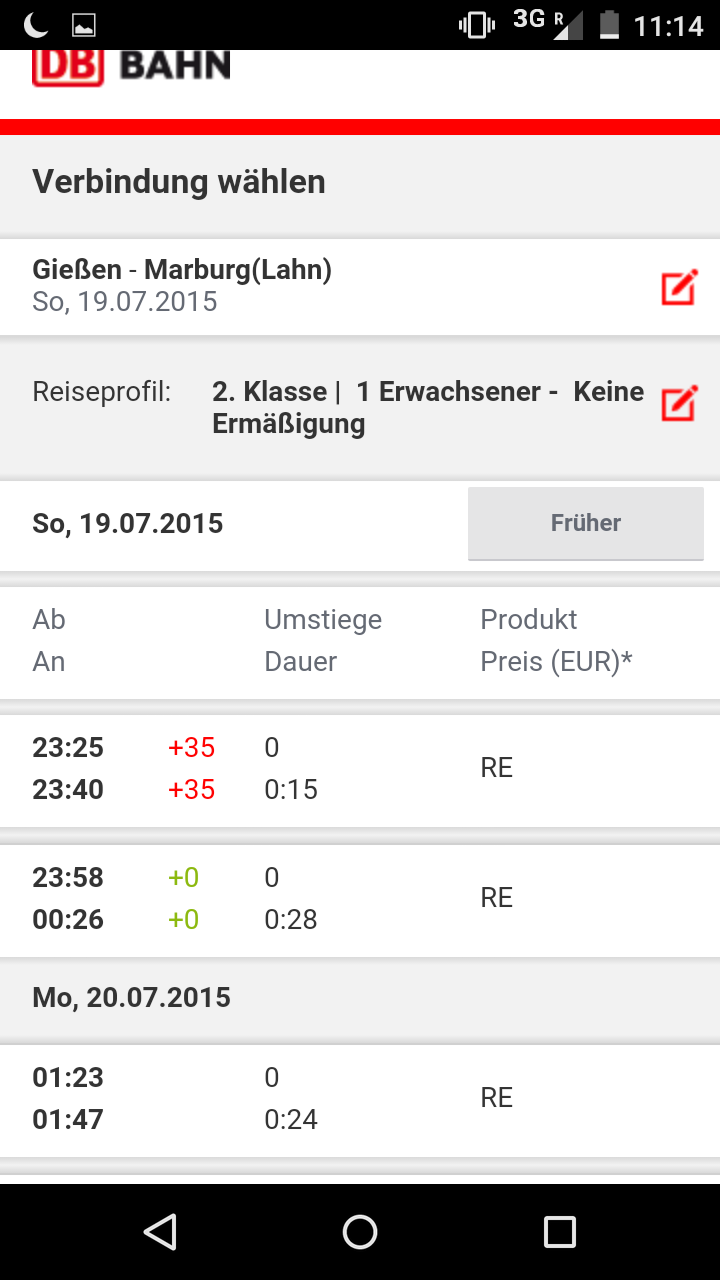 The train from Gießen was supposed to be 35 minutes late. On the train, the conductor said multiple times in German that the train was going to stop at Gießen and would travel no further. The third time, he started cackling (I'm not exaggerating, that's the correct word), and throughout all of his announcements we heard trance music playing in the background over the speakers. We arrived at Gießen and everybody got off. To our surprise, some people got on and we look at the side of the train. It turns out it's still going! And via Marburg! But the door closes immediately and we are stranded with another 10 annoyed passengers staring incredulously at the train leaving the station while everybody else walks home.

So we went to the taxi stand, and it was €55 to Marburg. Since I'm cheap, we went and sat in the train that was chilling at the station, 35 minutes late, with the conductor smoking a cigarette outside. And we pulled out our books. And we waited. The train finally pulled away 43 minutes late, and then somehow arrived 48 minutes late in Marburg. That's right, the train got even later despite it being after midnight and there being only one other train on the track.

Magically the bus was still running after midnight on a Sunday. When we made it home, I made some tea for us, and decided that a Sunday midnight bus ride meant that I could still love public transport. More importantly though, we still had a fantastic time in Prague.